It is a global day celebrating the economic, political and social achievements of women past, present and future. In some places like China, Russia, Vietnam and Bulgaria, International Women’s Day is a national holiday!

To honour this day, I will choose to write about Jackie Joyner-Kersee (USA) and Irena Szewinska (Poland).

I clearly remember Irena Szewinska of Poland winning the 400m, and Alberto Danger Juantorena winning the 400/800 double, at the 1976 Summer Olympics in my hometown of Montreal, Quebec, Canada.

Little did I know at the time this was Irena Szewinska’s 4th Olympiad! She had already competed in the 1964, 1968, 1972 Olympics and she would also compete in the 1980 Moscow boycotted Olympics.  Only Merlene Ottey has competed or qualified in 5 Olympics, but for 2 different countries. 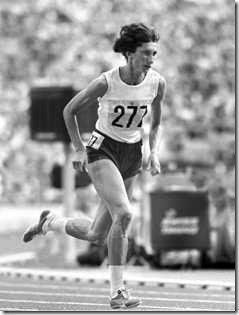 Jackie Joyner-Kersee competed in 4 Olympics with this medal resume:

In reality, you can compare her to Usain Bolt (4 WR’s) or Tommie Smith (11 concurrent WRs).

If you thought Szewinska was going to retire after her 400 meter Gold medal in her 4th Olympics, think again. In the 1977 World Cup, she defeated rising star Marita Koch from East Germany. Koch would rarely lose a race in her “prime”, so it’s great to see Szewinska dig deep in the last 100 for the win.   Koch would later set the WR standard of 47.60 in 1985… a record that still remains today.

As a bonus, she wrote a coaching guide called Training Program For Women Sprinters: The Annual Plan (PDF).  A must read.