By now, we all know the results from the 2010 Rome Golden Gala.  Here are some stories you would not hear or read from the mainstream media.

The Wheels on the bus goes round and round

In typical Italian fashion, the 4:30 bus from the hotel to the stadium left 25 minutes late. The Rome Sheraton is located south of the city (called EUR) and the Olympic Stadium in north.  How can we get across town in rush hour traffic?

By using Police escorts and green Military buses.  No air conditioning, though.

We got there in 30 minutes flat (incredible from cross town traffic).   Driving on one way streets the wrong way and running red lights can certainly raise your resting heart rate a few notches.

The Warm Up: Do whatever you got to do

With all the warm-up and stretching controversy, I was surprised to see a lot of athletes not doing the typical 1 mile jog followed by static stretching.  Most were doing dynamic stretching and drills to warm up (along with some easy strides and “shuffles”) to get loose and limber.

I was also surprised to see all the gadgets and gizmos used to get loose and limber.  I am referring to Multi-Purpose Inflatable All-Balls, massage sticks, resistance bands, ropes for active isolated stretching… you name it.  They were all there.

The take home message?  No two athletes are alike in getting ready for the race.  Do whatever you got to do.

Getting “Up” for the race

Along with bottled water, there were cases of ice cold cans of Red Bull.  Maybe because it was ice cold, but I saw several athletes and coaches taking one or two “for the road”.

Athletes like caffeine and “neuro transmitter drinks".   I’ve written the benefits of Vitalyze in several past articles.  Any little edge that helps you stay focused always help.

Children are Children all over the world

Usually, the warm up area in locked down and secure.  But because of the 12×200 community relay several hours before, there were about 10-20 kids who managed to sneak in the warm up area.  They were going from athlete to athlete asking for autographs on their new white souvenir T-shirt or notepad.

I was dressed comfortably in my usual sporting attire, and being the only Asian on the field, they approached me for autographs.  I was tempted to sign it “Liu Xiang” so when they got home, they would show their parents, “Look who signed this… 2004 Olympic Gold medal winner Liu Xiang!”.  Wow!

I didn’t have the heart to play that joke on them.  Hopefully they would go home and Google my name only to find out it was some Joe Blogger.

The Mens 400 meters: Disaster for the outside lanes

Here are the official results for the Mens 400 meters: 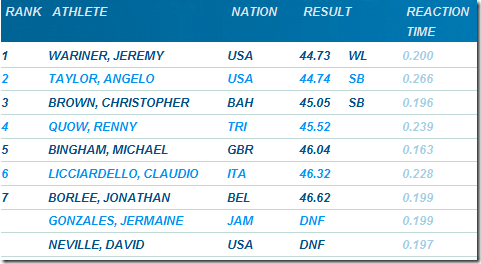 What you don’t see is Renny Quow, Jonathan Borlee, Jermaine Gonzales and David Neville had Lanes 6, 7, 8, & 9.

A boom camera got in the way at the 240 meter mark causing Jonathan Borlee, Jermaine Gonzales and David Neville to slow down to a halt.  Borlee had lane 9 and was able to slow down and duck under it.  Quow, in typical “Butch Reynolds, even split fashion” was well behind the leaders and was unscathed by it.  Gonzales and Neville DNF’ed.  I am sure they were pissed.

As the expression goes, “stuff happens”, even in a Diamond League meet.