How do you determine the Worlds Fastest Man?

They all are based on time over distance.

The 100m time includes acceleration out of the blocks for almost two-thirds of the race, so the peak speed would be recorded around the 60 meter mark. In Tyson Gay or Usain Bolt‘s case, it’s more like 65 or 70 meters.  For youth and Masters, it’s much sooner!

The term “Velocity” can be broken down into 3 components:

I used the terms “quicker” and “faster” when discussing then Moye blocks. You can be quick, but not fast. You can be fast, but not quick. Then there’s the trade-off between being too quick or too powerful out of the blocks..

The problem with being quick, like the Moye blocks, is you are standing up sooner and have better leg turnover, but no power. It’s like pushing a car stuck in the snow for all my friends in Montreal and the East coast USA. Are you vertical, or more horizontal for more power?

In order for you or me to calculate the speed of an object, we must know how far it goes AND how long it takes to get there. When you ask “how far”, are you referring to the distance, or the displacement?

Remember high school or college physics? Speed is a scalar and velocity is a vector.

The Distance is Fixed, the Measurement is Time

The average sports fan and TV viewer prefers (at least conceptually) the measurement of time. Of course, the average television fan doesn’t consider other factors such as wind, altitude, track surface, or modern technology such as speed suits or high tech sprint spikes.

But we really should be using velocity.

The problem with measuring time is it doesn’t show the whole picture. There are many components to 100 meter race.

In track, ideally a 10 meter segment can be used, only if official splits are setup. Video analysis are not accurate unless you have the same setup for every race. Video analysis is accurate when used among different athletes in the same race (like the IAAF biomechanical studies)

Then again, they don’t give gold medals to the fastest 10 meter segment, or 40 yard dash for that matter.

It doesn’t take much to figure out that the secret of a great 100m time is reaching top speed (acceleration), a fast top speed (maximum velocity), and maintaining that top speed (speed endurance). Perhaps splitting atoms is easier? 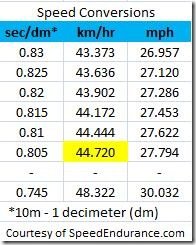 If you want a good chuckle, check out this YouTube video.  Remember, he is using a cheap radar gun used for baseball pitchers, and he is running away from the radar gun, and not towards it! 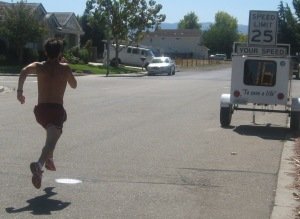 In his first attempt, after a quick warm-up, he reaches 16mph, but on his second attempt, he hits 18mph and eventually 19mph.  Not bad for an 800m/Steeplechase runner!

Now THIS is more accurate, don’t you think?

By the way, Usain Bolt and a few others would get a ticket for running faster than 25mph in a school zone!