Alan Oliveira WR 20.66 – Should he Run in Able-Bodied Olympics?

You are here: Home / Coaching / Alan Oliveira WR 20.66 – Should he Run in Able-Bodied Olympics?
13
SHARES
FacebookTwitter

Before I get to my point, I want to rewind to my post last Friday which poses 2 questions:

(1) At what point does drugs and supplements give an advantage to the athlete?

(2) What is the fine line between legal supplements and banned drugs?

Dwain Chambers ran 9.97 clean, then ran 9.87 coming behind second to Tim in that same race.

Oscar Pistorius and the Able-Bodied Olympics

So my question to you is:

At what point does technology take over from the natural (drug free) human body?

Exactly two years ago, way before a trigger happy Oscar Pistorius killed an innocent person, I wrote the arguments on if Oscar Pistorius should be allowed to run in the Able-Bodied events, such as IAAF Diamond league meets, World Championships, and the Olympics.

Paralympians do have a disadvantage, which is the start. They can’t accelerate as fast, thus 200 and 400m sprinters are forced to run negative or even splits.

But one of the controversies, which is either an advantage or disadvantage is, do the artificial legs give an extra bounce (or whip) and increase stride length?  I don’t know.

But what about advantages? I can name a few:

Sure, 20.66 won’t get you into the semi-finals, but I think there is a cross over point (eventually) where they will be equal.  And that is when the able-bodies athletes will start complaining. 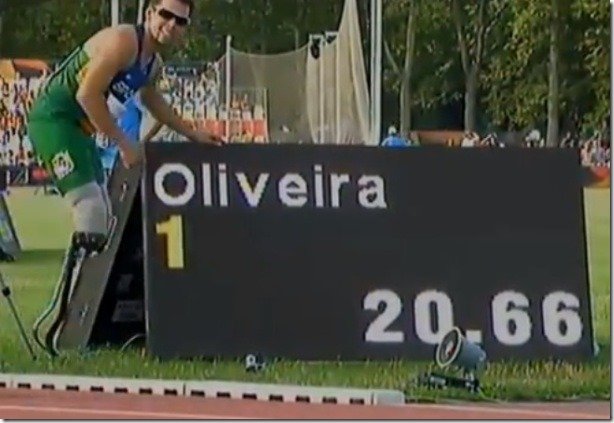