Interview with Merlene Ottey – Queen of the Track

You are here: Home / Coaching / Interview with Merlene Ottey – Queen of the Track
93
SHARES
FacebookTwitter

This is part 8 of the Freelap Friday Five Series, Season Three. To review the past 37 interviews, click here.

Part 7 was Dr Jess Greaux, on Rehab and Biomechanics 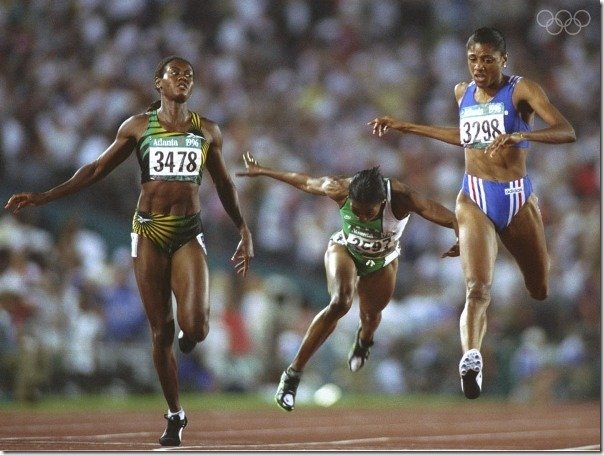 I don’t need to write a bio on Merlene Ottey, do I?  Everyone who runs track knows who she is!

[Tweet “Interview with Merlene Ottey – Queen of the Track”]

Interview with Merlene Ottey – Queen of the Track

Question 1– I saw you warm-up at the Windsprint Meeting years ago and you had a warm-up routine that seemed very focused on what you are doing. Could you share what your approach on the mental component of getting ready for competition? What has changed since the 1980s,1990s, and 2000s? Any insight here?

Merlene Ottey:  I am always focused in everything I do, and running is no exception. My approach has not change during decades. As soon as I start my jogging, the talking is over…..my concentration is now only about my running. I do the same thing for training. I have to make sure that my muscles are properly stretched, so I do pay attention to each muscle. I will also think about what I want to achieve during my race.

Question 2- You spent a lot of time working with Henk Kraaijenof (Read his Freelap Friday Five here) and he was ahead of his time with science and data. Share how sound principles of training has helped you with your own training in your later years?

Merlene Ottey:  In January 1989, I arrived in Europe to compete in the Indoor Meetings, including the World Indoor Championships in Budapest. I was based in Holland during the Indoor Season, and early summer, where I trained with Henk and Nelli Cooman (world record holder at that time). Was Henk ahead of his time with science and data?. That I don’t know?

In September, I competed in Italy, and in November 1989 I went to live and train in Rome with Stefano Tilli.

Question 3- Muscle injury is the plague of sprinters and you have used Tensiomyography for years being in Slovenia. Could you share how this may have helped you in the earlier part of your career?

Merlene Ottey:  My training is designed very carefully. I have limited the quantity of training and focus on the quality of runs and exercises. My body needs more time to recover from excessive amount of training than as when I was 20. It’s not that I don’t trust my inner feelings anymore, but there isn’t any more accurate way of determining muscle status than one which measure every little change in your muscle, locally, where all the processes of improving fast twitch fibres are taking place. I was lucky because I was one of the first athletes who had the opportunity to implement the new Tensiomyography (TMG) method in my training process. TMG introduces unique ways of training optimisation, follows changes of contractile muscle properties in time and alerts me when the parameters show local muscle fatigue even before I can feel it.

Question 4- You went to the University of Nebraska during your college years, something that many Jamaicans are no longer doing. What are your thoughts on the college experience in the United States versus going professional after spending time developing at home?

Merlene Ottey:  Yes, I went to the University of Nebraska in 1979, when things were a whole lot different. I spent the first 18 years of my life living in a small Village in Hanover where there were no running water, no electricity and no telephone. I went to school without shoes several times. I am very thankful to Nebraska for giving me the opportunity to continue my education, and to help develop my talent. Had this not happen, I would be still living in that same Village. The possibility to train in Jamaica did not exist. It is good to see that now there is a choice.

Question 5-  Many up in coming sprinters are hungry to run faster and compete internationally. What can you share about loving the sport to keep motivated so one can have a long career? Any ideas on keeping focused and prepared over the long haul. Your career in Track is a long one and many could benefit from your experience.

Merlene Ottey:  I believe my biological clock runs slower, because I always felt much younger than I actually was. I was competing at the highest level until 2012 which requires a lot of hard work. Running was and still is my life in order to have long and successful career, you must work hard, being able to learn as you go and adopt to the changes that are happening in life.