It’s simple… all you have to do is go 6-0 on 3 consecutive weekends to win the National Championships.  Or 7-0 if you want to include the play-in games.  The tournament is a single-elimination format with no consolation games.  So Go Hard or Go Home.  It doesn’t matter if you are 26-0 or 16-13, just throw out those damn stats and start with a fresh slate.

When I was in High School, the NCAA Basketball Tournament had 32 teams.  How long will it be before 128 teams make the Tournament? 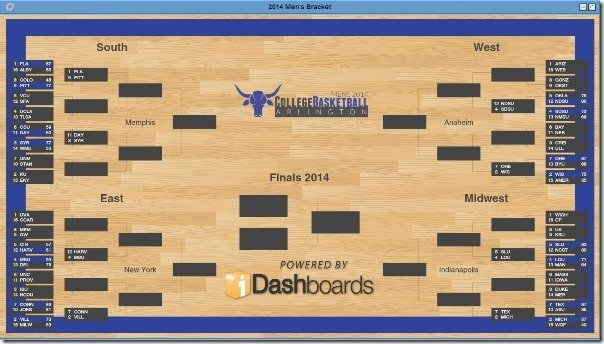 For the fifth consecutive year iDashboards will be tracking the 2013 NCAA Basketball Tournament.

The beauty of iDashboards is you can have all the stats in real time.  Check out:

You can now follow your favorite team’s journey through the tournament, gaining in-depth insight into player and statistics through the use of interactive intelligence and drilldown capabilities

Just mouse over each of your favorite team, and you can see the entire series of games highlighted.

NOTE: In case you missed it, here is the iDashboards: Best Sochi Olympics Tracking & Medal Count for the 2014 Winter Olympics.