This article is guest blogged by Travis Hansen.  It is an excerpt from his book The Speed Encyclopedia.

Click here for all the articles written by Travis Hansen 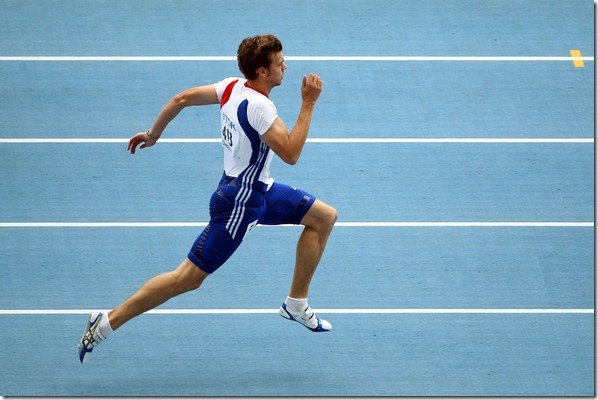 This is Part 2.  Click here for Part 1 of Building Your Horsepower

With this model, you will always be incorporating a majority of the training you need to be powerful throughout both the upper and lower body. Ultimately, both regions of the body are going to be utilized in any movement pattern, with generally one half being primary in certain movements and the other half secondary. Therefore we will definitely need both halves functioning at a high level if we truly want to maximize a movement pattern, especially in the case of sprinting or speed based movements. The luxury of this approach is that you could literally optimize any target movement by training within the confines of this model, as long as you successfully address each aspect. As a testament to this, I’ve utilized this model with long ball hitters, golfers, boxers, baseball players, lacrosse players, soccer players, skiers, basketball players, football players, etc. several times and the results were fantastic. I should quickly note that the only real differences between devising this approach for a football player and a tennis player would be alterations in the speed and specific strength categories. A large majority of sport specific movement patterns are lower or upper body speed based motions (throwing, kicking, hitting, running , jumping, cutting etc.). A tennis player’s speed work prescription to swing a tennis racket should arguably differ from a football player, who may potentially do less swinging and more throwing or pressing activities. Honestly, though, each of these activities are going to create the same speed or plyometric effect in similar areas of the upper body. The only other discrepancy would be the “Specific Strength” category under lower body strength training, which I will discuss in detail later on.

Next, we will examine the model in full detail so you’ll see what will actually help make you faster. I will introduce and discuss each component of the model (strength, speed, and power) directly, along with key principles, research, and techniques for each. Once I’m finished here, it is my hope that you will have an overwhelming acceptance of just how influential power can be for the sake of making athletes or anyone faster across any sport. Before I do, though, I want to leave you with a quote from a team of highly credible researchers in the field about the future and direction of their research on speed development and two confirming studies. “It is generally accepted that maximal running velocity requires high force production. 15 16 17 As such, strength and power training methods are almost universally promoted as a means of training to improve running velocity. 15 18 19 Therefore, the relationship between strength and power and velocity are of considerable interest in attempting to identify possible mechanisms for the enhancement of running performance.” 15 18 20 21 1

In 2012, Morin and his colleagues published a study in The European Journal of Applied Physiology that examined a series of sprinters from different skill levels,including 9 non-sprinters, 3 French national level sprinters, and a world class sprinter. The world class sprinter was Christophe LeMaitre, who is the fastest European sprinter ever to date. The conclusion of the study was that Lemaitre’s power output, especially in the horizontal direction, was the difference maker in his elite times comparative to slower runners. The researchers did mention that vertical force at top speed correlated significantly, but horizontal force was more important. 22 24

In 2012, Beneke and Taylor published a study in The Journal of Biomechanics called “What gives Bolt the Edge – A.V. Hill knew it already!” They assessed Usain Bolt’s past performances in the 100 meter dash, and eventually identified that the reason Bolt is superior is primarily due to the fact that he is able to maximize his position on the Force Velocity Curve and generate more power into the ground than any of his competitors! 23 24 In fact, the researchers compared the difference in power between someone running a 9.96 second 100 meter dash versus Bolt’s 9.58, and it was about 6%. That’s quite a bit when you figure we are discussing tenths of a second. They also noted in the study that Bolt is reaching what previous researchers indicated as the human limit of physical power output. 24 Pretty incredible.

Travis Hansen was the Head Strength and Conditioning Coach for the Reno Bighorns of the NBADL for their 2010 season, and he is currently the Director of The Reno Speed School inside the South Reno Athletic Club. He is the author of The Speed Encyclopedia.