You are here: Home / Other Sports / Basketball / NIKEiD and Kobe Bryant Collaborate for Christmas
0
SHARES
FacebookTwitter

NIKEiD AND KOBE BRYANT COLLABORATE FOR A SPECIAL HOLIDAY SURPRISE

BEAVERTON, OR – NIKE, Inc. and reigning NBA MVP Kobe Bryant are celebrating breakthrough innovation with a festive flair this holiday season and beyond. Beginning December 25, 2008, Bryant’s new Nike Zoom Kobe IV, his fourth signature shoe with the brand, will be available on NIKEiD.com with more than 5 billion design variations; an unprecedented combination of color, material and pattern options. 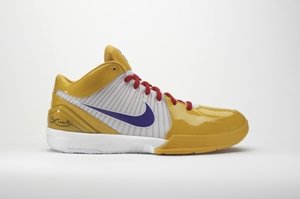 To celebrate the shoe’s launch on NIKEiD.com, Bryant teamed with NIKEiD design consultants to create two eye-catching color schemes – one with red accents and canyon gold premium leather that he will wear in game action along with a surprise creation.

Bryant will give away 100 pairs of NIKEiD-designed Zoom Kobe IV shoes to lucky fans at the Staples Center just prior to gameday on Christmas.

After-School All-Stars in Los Angeles, which provides positive and comprehensive after school programming for kids, will also receive the Nike Zoom Kobe IV as a special holiday gift from Bryant.

The NIKEiD Zoom Kobe IV shoes that Bryant actually wears during the game will be signed and auctioned on ebay.com with 100% of the proceeds benefitting the Kobe Bryant Family Foundation. In addition to the one-of-a-kind shoes, the winning bidder will receive two tickets to a future game and the chance to receive the shoes from Kobe directly.

Bryant was instrumental to the shoe’s design and demanded a shoe that was lowcut and even lighter at 11.6 ounces than the revolutionary Nike Hyperdunk (13 ounces).

“My goal was to push Nike to the limit and do something totally revolutionary,” said Bryant, reigning MVP who has won three world championships. “I wanted to create an amazing performance shoe and give it unlimited color and style potential for players worldwide.”

Nike Performance Footwear Creative Director Eric Avar accepted the unconventional challenge to create a low cut performance basketball shoe with Flywire, a performance architecture that uses thin and very strong nylon fibers to support the foot in the upper portion of the shoe. Avar also added LunarLite foam in the forefoot, a full-length Phylon midsole and Nike Zoom unit in the heel.

The Nike Zoom Kobe IV will be available at retail in China beginning January 1, 2009, and throughout the U.S., Canada and Europe beginning early February 2009.