Next to the Olympics and World Championships, the NCAA “March Madness” Basketball Tournament is my favorite event. It’s easy to win the National Championships. Just go 6-0 on 3 consecutive weekends. Go Hard or Go Home.

How long will it be before 128 teams make the Tournament?

Ironically, the National semi-finals, better known as the Final Four, is one of the highlights in April for the March Madness Tournament.

From Dynasty teams and Cinderella underdog stories, the NCAA Final Four Tournament is the most exciting team sport to watch next to the Football (Soccer) World Cup. But who has 4 years to wait for that? Speaking of Dynasty Teams, this Blog is loaded with UCLA and John Wooden stories.

Who can ever forget the 1985 NCAA Basketball Tournament when 8th ranked Villanova defeated #1 Georgetown with Patrick Ewing, the year before the 45 second shot clock was introduced? This is the video I show to my athletes because it just demonstrates anyone (or any team for that matter) can win on any give day. Throw out those damn stats. Let them play hard for 40 minutes, and give 100% on the court.

Here is a brief history of the number of teams in the NCAA Basketball Tournament:

iDashboards to the rescue 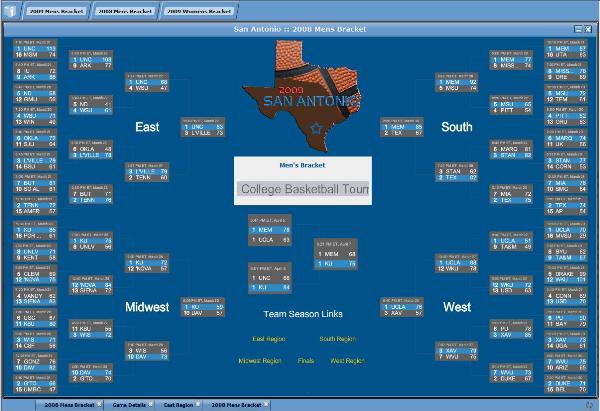 For your convenience, the 2008 results are displayed, for both Men’s and Women’s games.

Click on the stats on the 2008 Championship game. You can clearly see where Kansas won the game over Memphis.

Be sure to check in on Sunday night when Selection Sunday determines the top 65 teams. 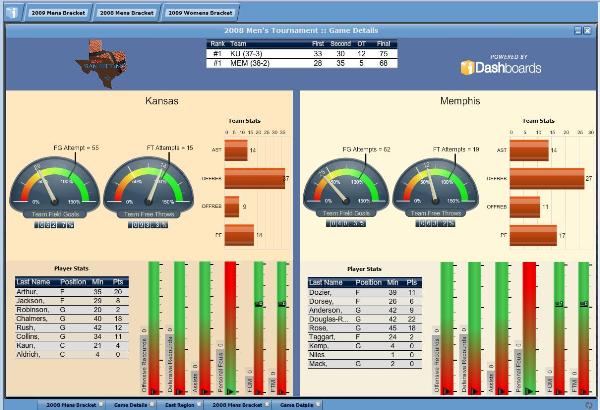