The final event of any Track and Field schedule.

I’ve always wanted to see the dream team of Steve Lewis, Quincy Watts, Harry Reynolds, Michael Johnson, because all were sub 44 men in the 400 meters.

But what really amazes me is the old “tainted” WR from the 1998 Goodwill Games (2:54.20) had only one sub 44 runner with Michael Johnson.  The other 3 were Jerome Young, Tyree Washington and Antonio Pettigrew (PED confession aside) 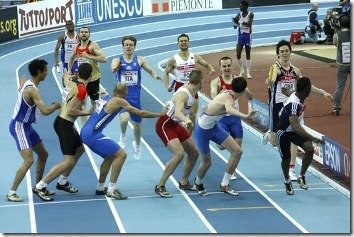 The performance of Team USA’s 3:01.96 (Kerron Clement, Wallace Spearmon, Darold Williamson, Jeremy Wariner ) in 2006 was rejected because no EPO analysis was performed at that meet.

So what does this prove?

The end result is usually a team whose sum is greater than the individual parts, thus doing more with less.

When I coach my 4×400 meter team, I don’t care if the other team has 4 PRs faster than my 4 guys.  Because on any given day, anyone or any team can be beaten.  Including taking down the World Record.  And those 4 guys proved it back in 1998.

Here are my philosophies to Teamwork & Leadership that I’ve applied in business as well as sports teams:

1) Find the right players/people. Talent helps, of course, because you can’t make a donkey win the Kentucky Derby (Quote from John Smith)

3) Create a unique identity to the team. Give your team a nickname, or better yet, let them decide one. It will help in their bonding and give them something to be proud of. Mind you, your front line of football linebackers may call themselves the “Crazy Dogs”, but it helped them win the National Championships. Sometimes that mental edge is all the confidence they’ll need.

4) Commit to winning/excellence. The people on your team must have the drive to succeed. In sports, winning is just the end result of a numerical score. You can win a game statistically, but really lose the game in reality and execution. Thus I prefer to use the term excellence. If you’re a dishwasher, then you set out to be the best dishwasher out there.

5) Give them a vision.   At work, if you have someone on your team who is there just for the money, punching in at 9 am and punching out a 5 pm, that person isn’t going to help your team succeed.  For the indoor relay WR attempt, having a $25,000 bonus helps!

6) Play/work with passion. Every person on your team must like love what they are doing.  Passion is the key.

7) Get out of the way.  Hey Teacher, Leave the Kids Alone! Stay off the field and let them execute! Of course, you wouldn’t want to get your nice Armani suit sweaty, would you?