Hemoglobin and Fatigue at Crunch Time with InsideTracker

You are here: Home / Coaching / Hemoglobin and Fatigue at Crunch Time with InsideTracker
13
SHARES
FacebookTwitter 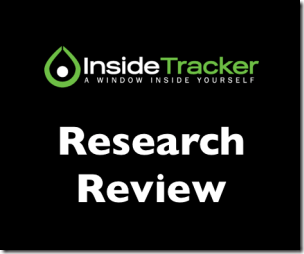 Question:  I play soccer and notice that I am getting less separation in the end of games. Ever since I started eating better I have found that the improvements in body composition have not translated on the field. Last week I was found not to have mono but my hemoglobin was lower than the keeper on my team, who also is on the same diet plan. I am confused, shouldn’t I have a higher hemoglobin level being a midfielder?

Answer: Many athletes that play team or mixed sports find themselves halfway between power sports and endurance sports with hemoglobin values. The reason is that training endurance and games will raise one’s plasma volume (blood changes) for better microcirculation. The real culprit I see is not the drop in hemoglobin from changes in plasma volume (PV) but likely from eating stricter. Modifications like eating eggs without yolks or strict meal combining are common patterns that reduce the nutrients needed to support hemoglobin function. A one week food diary is invaluable to find what patterns of eating you are doing to see what micronutrients are causing problems. Most nutritionists try to give general advice for healthy eating with athletes, but extreme diets are often taken from bodybuilding and physique competitions that don’t care about human performance, just human appearance. Be careful about

Training is not going to make changes to your hemoglobin scores unless you are using altitude tents, and even if you did the impact is going to be minor. Most pro or elite athletes that would benefit with extreme adjustments are unable to sustain the use of the equipment because of travel demands. The irony is that those that need such devices are the least able to benefit from it from a logistics standpoint. The international Skating Union found no relationship between Hemoglobin levels of elite or lower level skaters.

"The number and percentage of abnormal hematological findings were found to vary between 0 and 2 %, and failed to show a clear pattern or trend over the years. There was no difference in mean Hb levels between top ranked and lower ranked skaters, and no meaningful relationship between Hb concentration and ranking could be found."

Does the research  mean that no pattern exists with performance?  It’s complicated, but a simple way to summarize the interaction with all of the factors is to get to normal ranges of mixed athletes.  A German study1 showed that normal values were very narrow, but if a severely low score is present, it’s suggested that one follow up with a medical professional. Ferritin can hint to why hemoglobin values don’t fall in norms, but rare combinations of normal ferritin scores and low hemoglobin scores can occur, and the reasons are so different no real pattern exists. Elite athletes may have lower scores than sedentary people, so high scores or very extreme scores are not necessary, and genetics play a huge role with biomarkers.  Screening 3-4 times a year is suggested.

See also  Fish Oils for Inflammation: How Much is Enough?

The takeaway here is to get tested during key milestones of the season 3-4 times and watch your diet carefully, especially during heavy training periods and with diets that have very strict rules and limited options. If the diet is not something the has variety or whole food options, one has to be very careful of micronutrient pitfalls.