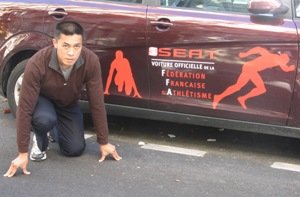 I was recently in France and I noticed SEAT was the official voiture for the French Athletics Federation (FFA).

I was so impressed that I had my photo taken with the car. You don’t see BC Athletics or Athletics Canada with a sponsor like that.

Now word has come out that the 2009 IAAF Golden League meet in Paris may be in jeopardy.

According to the French Athletics Federation (FFA), the French energy giant GDF Suez officially withdrew its sponsorship on Wednesday.

“It is vital for French athletics to maintain a Golden League meeting in this country,” said FFA president Bernard Amsalem. “We must quickly unite all parties concerned around a new project.

“The FFA can bring all its sporting and technical expertise, so why not mobilize its institutional and private partners around an ambitious project.”

It should be noted that GDF Suez contributes up to 40 percent of the Track meet’s budget. GDF Suez was a long term supporter and have been involved in the event for the last 10 years.

Track & Field, commonly known as Athletics, has reached new heights in popularity, thanks to Usain Bolt’s three world records. So why the pull-out?