I’ve been sitting on this article for months with hesitation.  Here is the preamble on why I never posted it (until today).

The problem with doing splits is you need extremely good video, preferably non-compressed HD quality, as well as the video of the starting gun showing the smoke coming out to start the timer.  You cannot use the sound of the gun.  Also, you can’t go on first movement, because it doesn’t factor in reaction time.

To refresh your memory, here is the race video on YouTube.

Everyone, including myself, talks about his poor reaction time.  If he had the same reaction time as his 100m performance in Daegu, he would have run 19.17 and broken the WR.

You can’t blame the starter as he was behind the runners, which is unusual, because he should be on the infield.  (I guess he didn’t want to get speared by the javelin throwers!)  However, there were speakers installed behind the blocks.

Also, Yohan Blake ran the race on a very wide track… almost a 125m curve/75m straight compared to most tracks being 116m/84m (see the runners compared to the Beijing track – photo below). He also had Lane 6 so the curve was not as tight compared to Lane 3 on a “standard” IAAF track. For Dimensions and Configuration of IAAF tracks, see Track Dimensions: How Many Feet is 400 meters?

Let’s cover some of the assumptions and known variables of the top four 200 meter races of all time: 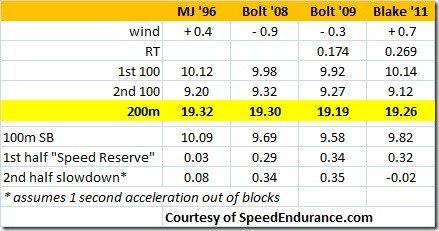 This is one of my favorite races, because he had a bad lane draw (Lane 3 instead of 6 with a sharper curve) and he stumbled coming out of the blocks.

I think we’ve dissected Bolt’s 2 WR enough in previous articles, but it’s a shame he didn’t run through the line in Beijing for the 100m, to get a true idea of his 100m WR.

His execution is consistent.  Run the first half 0.30 slower than your 100m PB for the 1st half, and expect a slowdown of 0.35 sec for the second half.

Yohan Blake admits he can beat Usain Bolt and set a new world record.  In fact, at a recent interview, he admits the instructions from Coach Glen Mills was “take it easy on the turn, and fly down the straight”.  And it was a short straightaway to boot (not the traditional 84m straightaway)!

MJ’s near even pace still surprises me (0.08 slowdown), but I have never seen a world class negative split until this race.  If you assume one second acceleration out of blocks, then he ran the 2nd half faster than the first (9.14 vs 9.12).

But his 2nd half split was the real shocker.

And you wondered why I initially though it was a timing malfunction?

Gone with the Wind

Wind and cross winds are always a factor in the 200 meters.  My pet peeve is the current method is not an accurate way to determine if tailwinds help a sprinter.  I covered that topic in Wind Assistance: Do Illegal Tailwinds help Sprinters?

Granted, in both of Bolt’s world records, he had a headwind, not to mention 4 rounds of the 100 meters and 3 rounds of the 200 meters.  We’ll have to see how 5 rounds of races (3+2) will affect these sprinters in a 200m, since each race is now reduced form 4 rounds to 3 rounds per race.

The Battle of Bolt and Blake

The 200 meters in London 2012 will be a very interesting matchup.  Most likely, they will have run 3 rounds (not 4) of 100m prior to the 200m.   It will not be a straight invitational final.  We know the strengths and weaknesses of Bolt and Blake based on the chart above.  So it will be a matter of Bolt regaining his form from 2009 and Blake “running down” his opponent.  When you are in front, you can run relaxed. 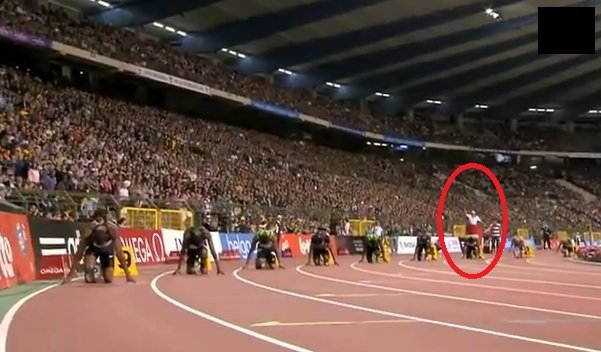 Note the starter in this picture, but they did have speakers in the blocks. 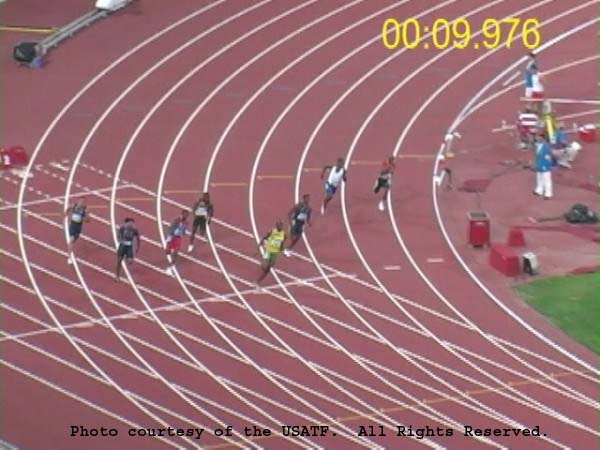 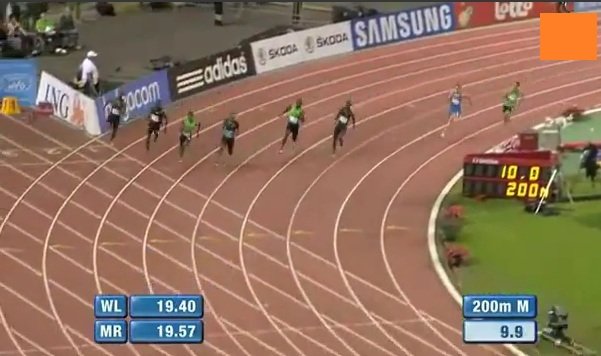 From the 100 meter splits above and from Beijing, Yohan Blake’s race was a very wide track.