Why not compare Harry Jerome or Bob Hayes?

What has changed with the advent of synthetic tracks, silent guns with loud speakers, and (sadly) drugs?  Were athletes using drugs before drug testing?

Here are 12 Factors that can determine the REAL 100 meter Performance, but only the top 3 are recorded for record purposes.  I was inspired to write this after reading what it would take to run a sub 2 hour marathon.  This list is a good checklist if we are ever going to see Usain Bolt or another sprinter run a sub 9.50 100m.  It will happen.  We just don’t know who or when.

I get mighty suspicious when we see a wind reading of +2.0 m/s.  Was someone standing in front of the wind gauge?  What angle is the wind really coming at?  Did someone spray “Stickum” or even hair spray to slow down the fans?  Just Google “Flo Jo WR wind gauge” and you’ll have enough evidence this reading can be controversial. 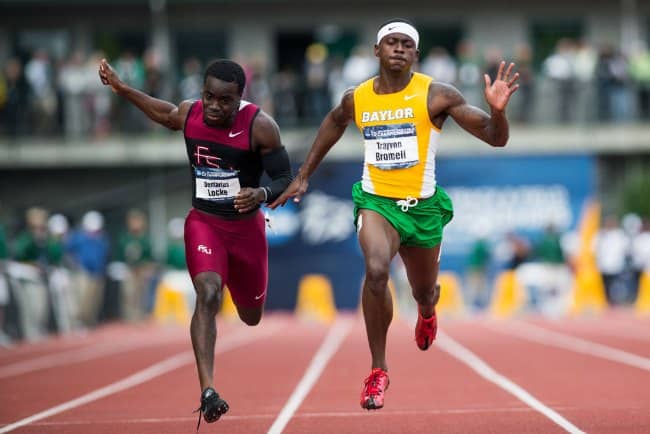 There’s no arguing about this, but why is 1000 meters the cutoff between sea-level and altitude?  Just like 0.100 is the cut-off for reaction times? (see below)  Less air at altitude means less air molecules, thus less resistance.  At 1000 meters, that can help reduce an elite 100m time by 0.03 seconds.  The problem is finding a track at 999m in elevation so you won’t get an asterisk (*) or (A) next to your time!  Calgary (or at least City Hall) is 1045m in elevation.  Darn.

And: Reaction Time Differences in Men and Women

But don’t get all worked up over a faster reaction time.  The first step sets you up for the entire race.

If you are going to consider altitude, you might as well record temperature and humidity.  No sprinter I know likes to sprint in cold weather.  Anything over 20C – 68F  (or even 30C or 86F) is ideal with a low to average humidity.  High humidity means more vapour in the air, and that will slow you down (see Altitude above)

I talked about differences in the magnitude and direction of wind, especially in a 200 meters.  The wind gauge is set at 50m on the sidelines with no draft or drag from other runners (or officials!)

And: The Effect of Wind on Curve Running

As you can see, not all wind is created equal!

These 2 articles will explain how unfair lanes and traditional starting pistols can affect your performance, especially in staggered lanes like the 400m or 4x400m.

I got in trouble by Mondo during the 2012 London Olympics when my site was getting hammered with traffic (over 14,000/day) and I had an article that was POSSIBLY destroying the reputation of Mondo.  It contained some proprietary and confidential data from Mondo which I obtained through a 3rd party thinking it was public knowledge… it was not!  (I did edit the article, but a further controversial article or report is coming out when I get time to compile and research it more, so stay tuned!)

See also  SHIN SPLINTS REDUX: There Were Two of Us…

There is no doubt in my mind that today’s synthetic tracks are helping in performance.  If you think it helps with the 100m sprint, you can imaging a 4x100m relay when all the runners are going at near-full speed for the whole 400m.  Both M&W WR were shattered at the London 2012 Olympics.

Harder soles and plates that promote a greater force upon ground contact is the key for a faster 100m sprint.

Coupled that with Christmas Tree spikes, which do not puncture the track surface to return energy, makes custom spikes a high-tech affair.  Only those athletes on shoe contracts can get custom spikes tailored to their needs.  Check out my YouTube video with Shon Grosse: History of Spikes, from Jesse Owens to Usain Bolt

We’ve seen how swimmers shattered WRs, all because of the drag between clothing and water.  Same rule applies for running, but to a lesser degree (higher speeds, but air as the resistance).  Just take a look at the 1968 Olympics with the Speed City athletes, and they had shorts that were flapping in the wind.

Today, some choose to wear a full body suit and hood like Canada’s Tyler Christopher, or Australia’s Cathy Freeman.  Some wear arm bands like Sanya Richards-Ross.  Anything to cut drag and be more aerodynamic will result in faster times. 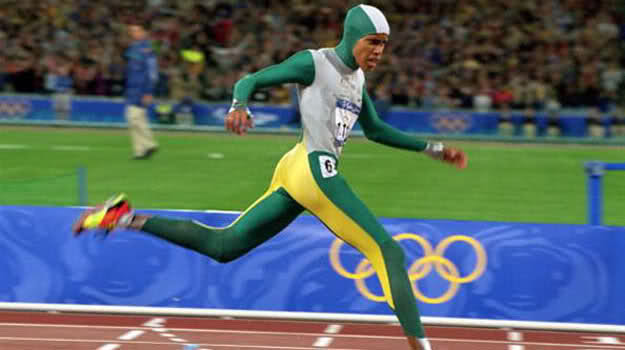 I don’t think the actual training volumes or methods have changed a lot in the past 20 or 30 years, but what has changed dramatically is the technical advancements, especially in high speed video analysis like Dartfish.

Take a look at Alan Wells training methods… not much (if any) free weights, but the focus is on explosiveness and power.

We all know what to do, but do we do what we know?

There is a big difference between running 3 or 4 rounds in the Olympics, compared to running an end-of-season meet in Rieti, Italy like Asafa Powell’s 9.77 back in 2005.  Then again Rieti has it’s own advantages to running an 800m in that stadium.  Which is best for a WR?  We don’t know for sure.  Just make sure you are ready when the gun goes off!

I’ll save the drugs part for another article, but we all agree that taking drugs AND passing the drug test will help performances.

We saw how a 9.44 was possible in my article Add Up the Fastest 10 meter Splits and You Get… 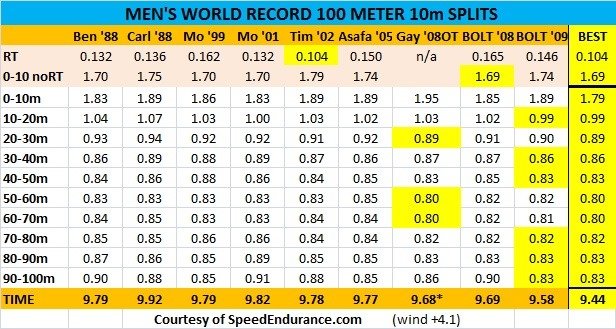 This is just a hypothetical time based on slicing the best 10 meter splits from various races showing a 9.44 is humanly possible today, if a perfect race existed!  And we haven’t considered all the factors, either.