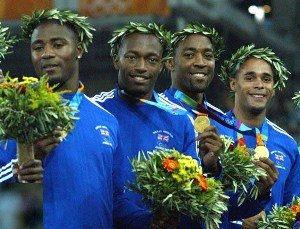 In 1996, when the USA were too busy worrying about where to fit in Carl Lewis for the 4×100 meter relay, Canada stayed focus to win the Gold medal.

But the Americans bounced back with a vengence with Maurice Green and won the Gold medal back in 2000.

However, in 2004, the Americans bobbled the second exchange between Justin Gatlin and Coby Miller which gave Great Britain the Gold medal in the 4x100m relay with a cast of:

Fast forward to 2008 and their team doesn’t have a hope in hell (in my opinion) to win the gold. Why?

1) Darren Campbell retired
2) controversial Dwain Chambers may not be allowed to run
3) Mark Lewis-Francis suffered an achilles injury last month and is out of Games:

The 4x400m is pretty much an automatic win for the Americans, but in the 4×100 meters, anything goes!