The vertical jump is one of many tests performed at the Football Combine. The following speed, power and explosive tests are as follows: 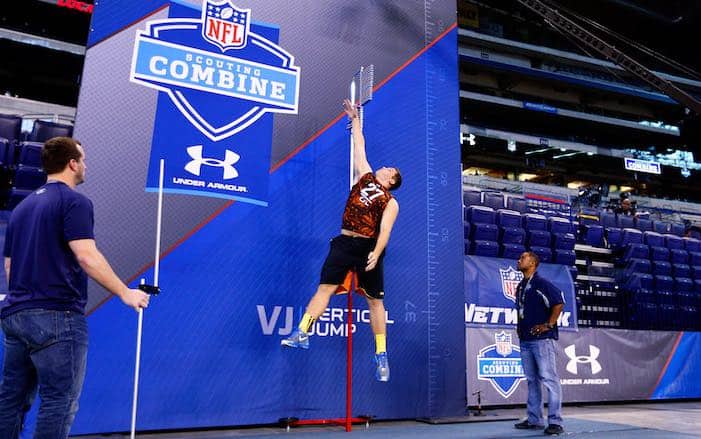 For Football quickness and agility, they may do the following:

For a rough idea on what kind of times you need for the 40 yard dash or 3 cone drill BY POSITION, see the article on Fastest Times for the 40-Yard Dash and the 3-Cone Drill.

That being said, here is a basic guide to increase your vertical jump with plyometrics and depth jumps, whether you are high jumper or football player.

The importance of plyometrics cannot be more emphasized.

Plyometrics refers to exercises that enables a muscle to reach maximum force in the shortest possible time. The muscle is loaded with an eccentric (lengthening) action, followed immediately by a concentric (shortening) action. This action is often confused with the stretch reflex reaction.

When you think of Plyometrics training, you immediately think of Track and Field horizontal jumpers (high, long and triple jump), volleyball players doing a slam or block and basketball players performing a dunk.

Plyometrics are not limited to these sports because they bridge the gap between strength and speed.

1. Wait until all the injuries are healed before beginning a plyometric program.

2. Do not confuse plyometrics with regular strength training. Balance the two, depending on the season and the loads according to the annual plan.

3. Introduce Olympic weight lifting first, especially power cleans from the ground. It is important that they acquire proper proprioception and co-ordination with the correct lumbar-pelvic rhythm, especially the knees, lower back and hips.

4. Start with depth jumps from the ground, then exploding upwards. If a sand pit is available, try the standing long jump, which is a common test for children to test for power, explosiveness and elasticity. The current world record is 12 feet 4 inches by a shot putter, not a sprinter of jumper.

5. Count the number of foot contacts per session, and perform the exercises on a grass surface to minimize wear and tear on the legs.

6. Quality not quantity is key for developing explosive strength. I always remind my high jumpers “Ultimately, you want to jump 7 feet once. Not 7 one-foot jumps”

NOTE: the volume MUST be tailored to each individual athlete.

7. A general guideline for each exercise is executed in sets of 10 repetitions, with 1-5 minutes of rest between sets

8. In general, you can do plyometrics 2 or 3 times a week, preferable at the end of practice. If you have a split session, make sure you have a few hours before each session.

9. The optimal dosage of depth jumps with an intense vertical or horizontal take-off in one training session should not exceed 4 sets of 10 jumps for well conditioned athletes and 2-3 sets of 5-8 jumps for lesser-conditioned athletes. Easy running and relaxation exercises for a period of 10-15 minutes should be done between sets

10. Depth jumps uses the central nervous system heavily. Therefore, they should be used not less than 3-4 days before a technique session. You can do some light strength work after a plyometric session.

11. During the competition period they should be included once every 10-14 days, but no later than 10 days before a competition.

12. Unlike weight lifting where you exhale on the concentric contraction (the force), your breath should be held and never released during the contact phase or landing phases where maximal effort is produced.

14. You should land on the balls of your feet, as the heel should not slam to the ground by momentum. This indicates the force (or the hight of the box) is too great.

15. Head posture and your “line of sight” direction play important roles in controlling all aspects of depth jumping. Pointing your head downward to look at the ground before take-off may result in an untimed muscle contraction or misaligned timing. Also, if the head is not thrust upwards during the take-off, maximal height will not be reached. Treat your body as a whole, and not just your legs to do the the work.