When Mike Marsh eased up in the 1992 Barcelona 200m SF in 19.73, people (including Marsh) were kicking themselves asking why didn’t he run right through.

No matter.. Michael Johnson would break that longstanding WR at the 1996 Olympic Trials, then demolish it with a 19.32.

But before Pietro Mennea, Italy had another 200m sprint champion.

Does the name Livio Berruti ring a bell?

Who the heck is Livio Berruti? 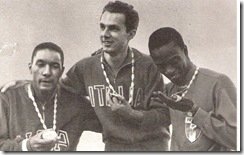 You can just imagine the home town crowd going nuts when he won.  This is Italy, you know.

But his pinnacle will always be the 1960 Rome Olympics. 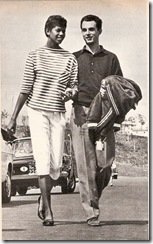 Another juicy tidbit of gossip that emerged from Rome was this picture on the left.

Livio Berruti and Wilma Rudolf?  It is well known that Mohamed Ali (then Cassius Clay) tried to flirt with the great Wilma Rudolf.

After all, you have to let go some of that excess energy after 11 months of hard training?

But you have to give credit to Italian men…

If you want to read more about the 1960 Rome Olympics, then read David Maraniss’ book: Rome 1960: The Summer Olympics That Stirred the World