There’s a reason why the October Issue of Men’s Health is pictured below.  (Thanks to Divinio A. for pointing it out)

Here is a snippet of the article on page 36 referring to Leaning Power: 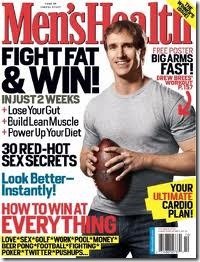 “Dig, dig, dig!” may not be the best advice to shout at a sprinter. A recent German study found that the keys to acceleration are forward lean and longer contact between your foot and the ground, not applying more force to the ground. Plant your foot farther than usual behind your center of mass for greater lean – this helps propel you at toe-off, the researchers say.

In short, they are saying the 2 secrets to sprinting faster are the forward lean and longer ground contact.  The forward lean is referring to shin angles.

Sprinters worry about stride length and stride frequency.  Heck, even Dwain Chambers thinks he can beat Usain Bolt based on these two parameters.

Ralph Mann’s research advocated reducing ground contact time as the only way to improve speed (all other variables constant).

Going back to basics, Bud Winter’s book So You Want to be a Sprinter mentions 3 ways to win a 100m race against Usain Bolt or a 400m against Jeremy Wariner.  (It’s on page 14 for those who own it)  The first 2 were mentioned above:

*This was the reason I chose SpeedEndurance for my Blog name, because I felt it was the least appreciated training aspect back in 2001 when I registered the domain name.  As a 400m sprinter, I didn’t worry about my start because I could gain a lot more by improving my speed endurance.  Same for the 200m, and to some extent, the 100m.

Bud Winter, who I felt was way ahead of his time, always advocated the forward lean and a strong push off (see page 14 of his book).

In his book, he lists 8 essential points to good sprint form (see page 23), with 8 accompanying drills to enforce those points.  The forward lean is #5 on that list.  If you don’t already own a copy, you can order it here. 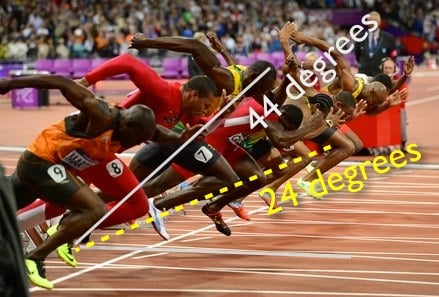 In the BBC video where Michael Johnson explains Usain Bolt’s speed, he repeats the “shin angle” line several times.  Like a lot of ex-world class athletes, MJ is now a coach.

The best example of shin angles and power is pushing a car stuck in the snow (for those who have to deal with snow).  Note how a lower body, spine, and shin angle will be more effective than being upright.  A simple drawing of physics and force vectors will show you 2 forces (actually 3):  Horizontal and Vertical displacements.  There is a 3rd force and that is gravity, which is constant for everyone.

Speed is the Result of Net Forces Acting on the Ground

The answer is neither. They are both measurements of speed but not the cause of speed. Speed is the result of net forces acting on the ground.

It is how fast the body is moving over the ground that matters. Apply more force and you will have an increase in stride length and stride frequency.

I don’t think I have anything to add to Charlie’s quote.  Enough said.

Last, but not Least, the Longer Toes Study

The Vancouver Sun gave the bottom half of Page 1 on Nov. 13. 2009 to a story from a SFU study that finds longer toes may give sprinters a leg up on other runners. Sabrina Lee (no relation), a post-doctoral fellow at SFU and Penn State researcher Stephen Piazza found that longer toes and a unique ankle structure give sprinters a “burst of acceleration” over others.

You can read the various articles here and here.  Snippet here:

Long toes provide sprinters the advantage of maintaining maximum contact with the ground just a little bit longer than other runners.

‘We wanted to see how much acceleration we could get out of the model when we changed the tendon lever arm and the length of the toes,’ said Piazza. ‘What we found is that when the Achilles tendon lever arm is the shortest and the toes are longest, we get the greatest acceleration.’

This is a bit of a contradiction to the reducing ground contact theory, especially during the latter stages of a 400 meters.

The moral of the story:  Speed is all about covering distance in the shortest amount of time.  Everything you do in your training plan has to must reflect a training element to increase speed, power and strength.