Below were the top rated articles from the 2nd half of 2014.  Note these are only my articles, as I’ll do separate blog entry for all the guest writers. The term “over distance special endurance” can be translated as “over time” or “extended time” special endurance.  Australian Darren Clark would do 3 x 2 x 360m hills with an approx. 6 degree slope anywhere near 45+ seconds, and 52+ seconds for women

How Much Can You Improve After High School?

The percentage increase varies from 1 to 5 percent, with about three percent being the norm.Coincidentally, Usain Bolt’s top speed at 60-80m is over three percent faster than Ben Johnson or Mo Greene.  That’s quite a bit considering less than one percent makes a difference between 1st and 4th.

How Long Does it Take to be a World Class Sprinter?

The short answer is 1 to 7 years, with a word of warning.  The study shows that the developmental histories of elite sprinters contradict the popular deliberate practice model of expertise. According to this model, there is no such thing as innate talent. Instead, 10 years of deliberate practice (otherwise known as the 10,000 hour rule) are necessary and sufficient for anyone to become an expert in any field, including sports.

The Four Stages of Competence in Track and Field

How do you achieve high horizontal sprinting speeds without taxing the CNS (central nervous system), or if you have limited facilities?  Remember, you want to work on jumping technique, not top end speed.  Thus the French build a ramp!

What Can We Learn from Secrets of Soviet Weightlifting?

Basically, the four basic rules that he found common to the Soviet lifters:

Here are 12 Factors that can determine the REAL 100 meter Performance, but only the top 4 are recorded for record purposes.  I was inspired to write this after reading what it would take to run a sub 2 hour marathon.  This list is a good checklist if we are ever going to see Usain Bolt or another sprinter run a sub 9.50 100m.  It will happen.  We just don’t know who or when.

If Your Long Hair Touches the Track in the Set Position, Is This a False Start?

My Take on Overspeed and Resisted Training Devices

One is you need proper biomechanics. The second is having enough strength and power in the legs during ground contact. If you don’t have these two in a solid foundation, then there is no rush to start using overspeed and resisted training devices, especially for Youth and Masters sprinters.

Everything he says is spot on.  Great athlete, maybe a great coach one day?  :)

The best cure is time, but the article has 17 tips.

My Two Secrets to Running Fast

If I had to sum up my training methods in 2 words, it would be Biomechanics and Power.

The new findings indicate that the secret to elite sprinting speeds lies in the distinct limb dynamics sprinters use to elevate ground forces upon foot-ground impact.The top sprinters have developed a wind-up and delivery mechanism to augment impact forces. Other runners do not do so.

Why 0.24 Seconds is Added to Hand Times

I’ve covered (with a little help from some guest writers) topics ranging from the infamous toe drag, how to use blocks, getting out of the blocks, the Bud Winter Rocket Sprint Start, 2 point starts, 3 point starts, 4 point starts, falling starts, and asymmetrical hand positions.

See also  Learning is a Cycle

Let’s take for example Clyde Hart’s 200 meter workouts, which are usually done on a Monday. 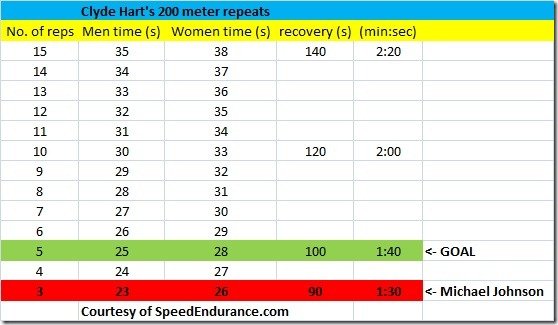 I get a lot of questions by email.  So instead of responding privately where only one person gets the benefit, I had a Google+ Hangout on Air session which are automatically recorded and uploaded to my YouTube channel on SpeedEndurance TV.

My top three secrets for sprinters are muscle reactivity & elasticity, hip mobility & flexion, and pelvic stability.In plain English, that is specific application of force during ground contact.  Because we know there is nothing you can do in the air to apply more force and cover ground (i.e. move forward) faster.